Renowned rapper Umusepela Crown will be releasing a new song centred at
speaking for all the orphans & homeless children. The rapper has joined hands with fast emerging and creative rap force Toloma Siimpo, as well as budding Chingola based female singer Marie.

The song “Sorrow” which is slated for official release on the 23rd of October this
year, will act as a wakeup call for the general humanity to pay attention to the
emotional and physical struggles that every orphaned child goes through. The song
is expected to act as a channel to restore compassion and empathy amongst
ourselves towards the unfortunate individuals who are often being mistreated and
neglected. 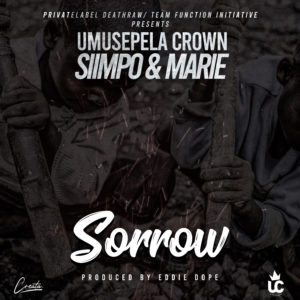 To bring this project to fruition, Umusepela Crown has partnered with Team Function
Cares Initiative, a Non-Governmental Organisation (NGO) that facilitates Talent
Branding opportunities, Developmental collaborations and progressive Partnerships.
Umusepela Crown reached out to his regular music partner, and producer Eddie
Dope who have been confirmed as the official Executive Producer of the entire
Project. He further reached out to Toloma Siimpo via a Facebook Post, an idea
which the later embraced for the greater good.

Throughout the process, Mufasa has openly been sharing updates and insights with
his friends & music community through Social Media. This included the involvement
of a new face on the scene, Marie; whom Umusepela Crown publicly introduced to
his Facebook fans as the lady to work on the chorus. The official music artwork was
intelligently designed by Creata.
Stay connected with the proceedings for this entire life changing progression, as we
anticipate to hear the cry for morality, unity and consciousness among the human
kind.
Teamsyre Network
Official Press Release Team for Umusepla Crown.