XYZ Entertainments CEO and hiphop awarding artist “Bobby East”  has finally announced the name of the forthcoming body of work, the album is called  “Daywalker Vs Rob“ this news came to light after he posted on social media platforms.

The project release date is not yet known but it scheduled for premier later this year and the track list and cover album are shared but we will keep our ears on the ground.

Bobby East also cleared the air waves that it’s not a mixtape but long play “LP”. The phenomenal album might be the last studio album we are going to get from the rapper cause earlier this year he hinted his retirement. However his previous project “Vanilla” bagged album of the year award at Kwacha Music Awards  and this coming up LP will even break boundaries. 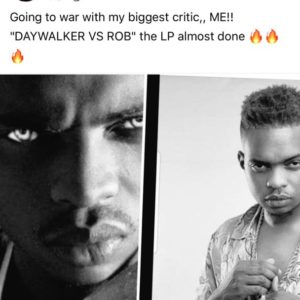