Follow the massive uproar from fans and social media influences Alpha Entertainments/Kopala Swag has finally issued the official public statement regarding Muzo’s claims and providing evidence that the “Ntenkwa Nemitundu Shibili“ album in question was released in 2014 and they further went ahead to challenge the lyrical genius to deny that he released his album under their label and he should go further to tell the public the titles of the songs on that unreleased album and the team stand ready to help him locate the said unreleased album.

The wrangle started after Alphonso spoke about the Record Label (Alpha Entertainments) still holding onto his phenomenal project during an interview with Hellen Phiri. The rapper said that he left the Label in good faith, after his contract officially expired and was not intending to have it renewed. but  Alpha Entertainments was not willing to publish his body of work as a way to hold him to stay.

There is a linked audio conversation of former radio personality now social media influence Sanga Tembo with Kopala Swag head producer and label manger Dice. In the linked audio Dice said the Muzo left before the his album was released hence the record label had no powers or authority to promote the said album.

Below is what the statement quoted. 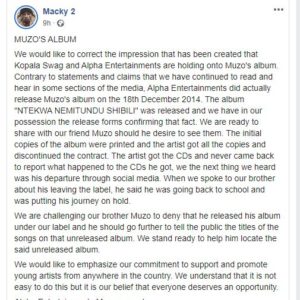